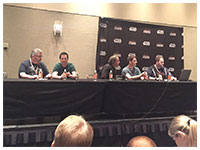 Celebration Orlando 2017 Collecting Track: Fakes And Scandals
Posted by Adam on April 26, 2017 at 11:44 PM CST
Sadly, as a result of the money that people are willing to spend on Star Wars, this often results in less scrupulous individuals selling fake items and scamming collectors to make a quick buck, or in some instances, a lot of money over an extended period of time. Read on to find out some of the major scandals over the years.

After a brief introduction and clarification that the panel, the first scandal discussed was that referred to as the Ren Hoeck Affair from early 1996, which involved somebody by the name of Brian Kettler posting misleading descriptions on early Internet text-based newsgroups that suggested he was selling vintage Kenner items. Ultimately what he sent was modern-day equivalents such as Galoob mini-ships and Bend-Ums, scamming 20-30 collectors of an estimated $5,000.

The moral of the story is, if it seems too good to be true, it likely is!

Next up was the Fake "Blue Harvest" Hardcopies, which were vintage prototype hardcopies originally obtained from former Kenner employees that were passed of as authentic from 1977-1985 and involved both the 3 3/4" action figures as well as prototypes of some Micro Collection 4-ups. Involving both online and in-person sales, the scam occurred between 1993 & 1995 and has continued to spread amongst collectors and dealers since then, costing several dozen collectors a total of more than $10,000.

While hardcopies were typically cast in green (dynacast) and brown (carbalon) urethane, the fake hardcopies were cast in blue urethane (hence the name) not used during the vintage Kenner era.

As it's been 20 years since these first surfaced, the question has been asked as to whether or not these pieces have any historical value. The key point to remember is that while the Blue Harvest pieces did come from the original silicon molds, they were not used in the production process of the vintage Kenner Star Wars toy line between 1977 & 1985.

Nevertheless, some interesting pieces including unproduced Micro Collection 4-ups, 2-up 8D8 and EV-9D9 revealed small unproduced or alternate versions of certain arms/legs etc., with the moral of the story being that even Kenner employees or other first-hand sources can become corrupt and influenced by the lure of money.

Following a similar vein, the next scandal discussed was the Fake "Green Harvest" Hardcopies, which involved a collector who had been known and active within the community for several years, selling fake painted and unpainted hardcopy figures as well as wax sculpts. Sales were made both online and in-person between 2007 & 2010, and more than twenty collectors were affected, losing out in excess of $200,000. The moral of this story is that even known, well established collectors and Kenner sources can turn to the Dark Side.

The scandal first broke in April 2010 during Celebration V, with the issues that led to this being as follows:

One example showed an authentic Lumat figure with a broken left ear alongside unpainted and painted figures that were both cast from the original. An overlay and color filter of the original over the fake unpainted figure demonstrated that the line of the ear break matched perfectly and showed that an attempt had been made to repair the ear on the fake figures.

Another major scandal that scammed thousands of collectors out of a significant sum of money, in this case more than $100,000, was committed by Toy Toni, who was based in the UK, but affected people worldwide beginning in the early 1990s through to 2014. Using Palitoy, German and Clipper vintage cardbacks, the scheme began in the mid-1980s, and spanned the following timeline:

Between 2000 and 2013, AFA graded over 2000 Toni's, while there is no population report available from UKG, but the number is approximated at close to 1000 figures. Toni's defence was first to blame others, such as Arthur Bailey (who died in the mid 2000s) and Jason Joiner who exposed him on SWFUK, then deny everything and ultimately say nothing.

Fake coins are nothing new, so it likely comes as no surprise to learn that fake POTF coins have been distributed over the years, with four different suspected recent re-strikes:

Furthermore, taller die and hob sets produced for the collector market were discovered, despite the fact that they would not fit into the mint's coin press, while the hobs were not used in the production process, only to create fake dies! The mint removed copyright markings from the real dies for the MMC line, but incorrect dates were added to the dies when the fakes were created, while real dies with the incorrect dates were used to strike additional coins for the collector market.

Other cautionary tales involved posters and autographs, pre-production figures and modern prototypes. Also, vintage-bagged figures either in resealed or re-taped bags, as well as sealed in non-authentic bags with no logo or text on, and even printed logos and text to replicate authentic examples.

When it comes to protection and recourse, here are some tips on what to do:

The Emperor's Royal Guard, sponsored by James Gallo and Mark Salotti, was the Star Tot given out at this panel.
SEND