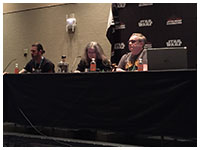 The panel began with a brief history lesson, pointing out that Star Wars vinyl collectibles have been around longer than most people realize, with the likes of the original soundtrack and the vinyl-caped having been released more than 3 decades ago.

2007 saw the release of the first Star Wars Wacky Wobblers, which also included the first chase variant along with convention and store exclusives followed three years later by the Monster Mash-Ups, after which Funko diversified into electronics, including lamps, headphones and USB drives among other things.

Star Wars Funko Force plushes were released in 2009, becoming part of the Pop! evolution, with Funko Force 2.0 making an appearance at SDCC 2010. This was followed with the 3 3/4" Darth Vader figure being the first offical Pop! release, and a first exclusive at the 2012 Emerald City Comic Con. The Wampa was the inaugural 6" figure in 2014, and Walgreen's offered the first store exclusive the following year.

At that stage, there were 57 Pop!s, averaging about 16 per year.

The design process was then discussed, outlining the concept art, 3D sculpt, colour callouts, moulds from the 3D sculpt, painted samples and the Bling illustration used on the box.

There are multiple ways of keeping track of the Pop! figures that are released, including the regular social media channels of Facebook, Twitter and YouTube, as well as blogs, forums, fan-run sites and Reddit.

When it comes to numbering, variants may re-use existing numbers, as was the case with Chewbacca (#6) which was later released as Hoth-themed version exclusive to GameStop, but also the regular First Order TIE Pilot that was numbered #89, while the Special Forces version was numbered #90.

Common lingo to become familiar with is common, which means the product is everywhere, while exclusives are only available at certain stores/sites, including Walmart, Target, Amazon and Hot Topic among others. Limited indicates that the product is only available for a set period of time, chase refers to a variant version, pre-release is an item that is yet to be released and vaulted is an item that is no longer in production.

With Funko Pop! Rides having been released for other brands, the first announcements for the Star Wars line feature Rey on her speeder and Luke in his Landspeeder.

In addition to Pop! figures, Funko have also recently released other items including Fabrikations, Plushes, Mystery Minis, Hikaris and Wobblers for Rogue One.

The final topic of the panel was Funko's Pop-Culture Hub in Seattle and Digital Collecting, while a lanyard and one of three special badges were given away to attendees.

The Star Tot given out at this panel was The Emperor, sponsored by Ross Cuddie.
SEND

Other 6" Star Wars Lines
I have some things I am looking to sell, and wondered if Ebay is the best real option.
Recently Watched Movies
eFx Mandalorian S2 Helmet
The Bad Batch Wrecker
The Armorer Credit Collection (Rumored)
The Black Series 6" - General Discussion Thread