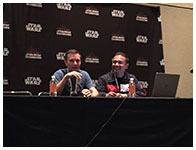 Celebration Orlando 2017 Collecting Track: Time Travel To Toy Factories Around The World
Posted by Adam on April 27, 2017 at 10:45 PM CST
Chris Georgoulias and Luis Galvez presented this panel on the final day of Star Wars Celebration, taken everyone back to a time when Kenner toys were being made in toy factories around the world.

While many toy companies around the world distributed Kenner's vintage Star Wars figures, not all had their own production facilities. Kenner, Palitoy and Lili Ledy were three that did, and were the focus of the panel.

The process for creating the toys via injection molding was briefly described before pictures of the production line from Kenner were put up, showing assembly and packaging for the X-Wing, Darth Vader's TIE Fighter, the Death Star Space Station and the Battle-Damaged TIE Fighter.

Moving on to Palitoy, images were shown of the Millennium Falcon on the assembly line, a reference board for showing sticker placement, the AT-AT head being assembled, blister packing figures and cardbacks being placed in the press.

For Lili Ledy, the headquarters were in Tlalnepantla, Mexico, where Alejandro Becerra was the Quality Control Director and judging by the pictures, he was clearly a Star Wars fan! A series of images then showed parts of the production process:

The final set of photos was from the packaging and distribution:

The Star Tot given out at this panel was Lando Calrissian (Skiff Guard Disguise), sponsored by Luis, Josefina & Luis Jr. Galvez.
SEND