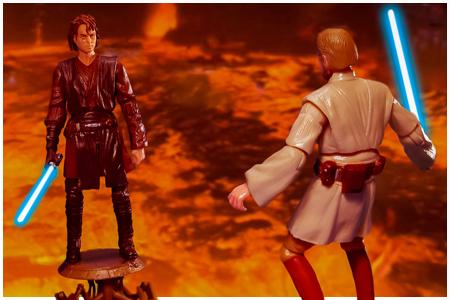 Revenge of the Sith
This may not be the pre-armor Darth Vader figure ever produced, but it is the first pre-armor Darth Vader figure to ever be packaged on a black and silver Classic Kenner card back. When Hasbro first revealed this figure at the 2010 San Diego Comic-Con, it was called VC13 Anakin Skywalker, but after a small discussion, Hasbro made the call to correct the name to VC13 Darth Vader. As such, there was a significant running change on the figure's card.

The second wave of The Vintage Collection was revealed at the 2010 San Diego Comic-Con. With the exception of a single Star Wars (A New Hope) figure that we've always wanted on a Kenner card, this assortment mainly focused on the characters from Revenge Of The Sith, marking the first time anything other than the Original Trilogy was represented on a Kenner Vintage card. The Assortment included Darth Sidious in his brown robes, Darth Vader as he appeared on Mustafar, Sandtrooper with a white Sergeant pauldron, the clean Phase II Clone Trooper, repacked Obi-Wan Kenobi, General Grievous with soft goods cloak, the definitive Magnaguard and the (yawn) repainted Clone Commander Cody. Wave two began shipping in September 2010.