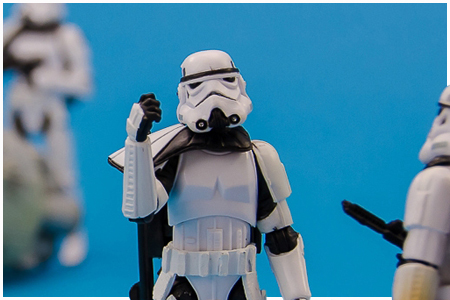 A New Hope
The VC14 Sandtrooper was the sole Original Trilogy figure in the second wave of Hasbro's 2010 The Vintage Collection, but that isn't its only notable fact, as this is the first Sandtrooper to ever be packaged on a black and silver classic Kenner card. The figure itself is a repack of the 2009 Walmart exclusive The Legacy Collection Dewback with Imperial Sandtrooper. This time out, the figure includes a BlasTech T-21 Rifle.

The second wave of The Vintage Collection was revealed at the 2010 San Diego Comic-Con. With the exception of a single Star Wars (A New Hope) figure that we've always wanted on a Kenner card, this assortment mainly focused on the characters from Revenge Of The Sith, marking the first time anything other than the Original Trilogy was represented on a Kenner Vintage card. The Assortment included Darth Sidious in his brown robes, Darth Vader as he appeared on Mustafar, Sandtrooper with a white Sergeant pauldron, the clean Phase II Clone Trooper, repacked Obi-Wan Kenobi, General Grievous with soft goods cloak, the definitive Magnaguard and the (yawn) repainted Clone Commander Cody. Wave two began shipping in September 2010.