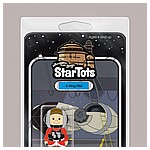 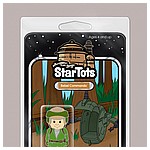 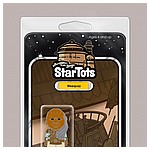 Collecting Track Swap Meet and Social
Collectors will have a chance to trade their collectibles, or just mingle with other collectors. Meet like-minded Star Wars treasure hunters from around the world!
12-12:45pm

Bounty Hunting for Exclusives
Do you like to have things no one else has? Are you always on the hunt for the exclusives and variants? We are too! In this panel you will learn about the history of Star Wars exclusives as well as receive some tips to uncover secrets to exclusive collecting. Experts Rachel Rossilli, Michael Morris and Eric Pfeifer share their secrets.
1-1:45pm

Collecting Star Wars  A Singaporean Perspective
Derek Ho will highlight the Star Wars phenomenon and its influence on growing up in Singapore & Southeast Asia. He will present insights into many of the items that were released exclusively to the region.
2-2:45pm

Time Travel to Vintage Toy Factories Around the World
A tour with a time machine to visit the factories of the vintage toy line with photos of the production process from Kenner, Palitoy, Lili Ledy and other companies that made the Star Wars toys on the 80s. This tour will be guided by a round table of collectors, including Luis Gálvez, Chris Georgoulias and Todd Chamberlain, who will explain the processes and compare them while discussing rare collectibles.
3-3:45pm

Star Wars Collecting in Argentina
Collectors Daniel Segovia (co-author of the books Guerra Estelar, The Story of Star Wars in Argentina and Guerra Estelar II, The Story of Star Wars Top Toys and Latin American Toys), Diego "Doe" Fernando Gòmez, and Gabriel "Chapa" Campos will discuss Star Wars vintage collectibles from Argentina, which is an under-appreciated region for Star Wars memorabilia. The panel members will share pictures of rarely-seen collectibles as they explain details about Star Wars merchandise available in Argentina, much of it exclusive to that country.
4-4:45pm

From Star Wars to Rogue One: Unique Promotions from Spain
Premiums and promotions have been part of the Star Wars universe since the very beginning. Spain produced some of the most hard-to-find items in the world, and now you can learn about these unique collectibles. A Top 40 list from the common to the
rarest in toys, trading cards, posters, water and even toothpaste, from La Guerra de las Galaxias to Rogue One: A Star Wars Story. Join Jose M Arosa, Spanish collector and enthusiast, to discover a whole world of new treasures to track, collect and share with friends.