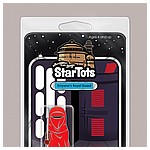 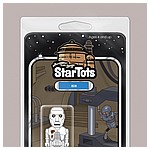 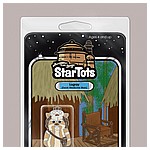 Star Wars Collecting: Social Media & Networking
Networking has been an essential tool from the very beginning of the collecting hobby. As technology has changed, so have the means by which collectors connect with one another and build communities. In today's highly-linked world, there are so many options that it can be a challenge to find the outlets that work best for you. The panel will emphasize how collector friendships have remained an important resource despite the multitude of changes in technology and methods of communication. We will explore the evolution of networking, discuss a wide range of collecting communities you can join, and highlight opportunities for networking at Celebration Orlando. Presented by Krister Persson, Chris Logli, Daryl Whitlow, Mike Ritter, CJ Fawcett, Bill Cable and Amy Sjoberg.
12-1pm

40 Years Later: Star Wars Original Film Memorabilia
As we celebrate the 40th anniversary of the dawn of Star Wars, this panel looks back a long time ago to the collectibles associated with the original 1977 film. Join us as we share and discuss some of the very earliest, most unique, and seldom-seen Star
Wars items from 1975 through 1978 that were directly related to the motion picture. These collectibles were involved in making, promoting, experiencing, and acknowledging the movie that unexpectedly became a global phenomenon, that touched every aspect of society worldwide for the ensuing four decades. Come re-experience Star
Wars humble cinematic beginnings through its film industry memorabilia, and its impact on the genesis of Star Wars collectible items of every form and fashion imaginable! As a critic from The Hollywood Reporter forecast after the first press preview screening: Star Wars, a Lucasfilm Ltd. production for 20th Century-Fox, will undoubtedly emerge as one of the true classics in the genre of science fiction/fantasy films. In any event, it will be thrilling audiences of all ages for a long time to come. Presented by Michael Novak, Duncan Jenkins and Gus Lopez.
1:30-2:30pm

Hallmark Collectibles
Join super collectors James Burns and Duncan Jenkins as they look back at the history of Hallmark collectibles from the galaxy of Star Wars. Since 1996, for over 20 years, Hallmark has been putting out handcrafted ornaments  with over 150 to-date. Alongside greetings cards, plush, exclusive buttons/badges at conventions and lots of other items, Hallmark collectibles have become a firm favorite among Star
Wars collectors worldwide.
3-4pm

Star Wars at the Movies: Vintage Theatrical Advertising and Collectible Ephemera
The original theatrical releases of the Star Wars Trilogy took place at the end of an era in movie marketing. Printed ephemera and various promotional items played a critical role in the original films' success in capturing the attention of the press, prospective film exhibitors, and moviegoers around the world. This narrative-driven panel will explore the diverse realm of vintage theatrical advertising through the eyes of a time-traveling Star Wars superfan and collector from the early 1980s. As our narrator reminisces, the panelists will highlight everything from press books, print ads, and lobby cards, to souvenir programs, Kenner toy tie-ins, and special screening memorabilia that brought that galaxy far, far away to theaters in our own universe. Presented by Stephen Danley, Ron Salvatore, Skye Paine and Todd Chamberlain.
4:30-5:30pm

A Star Wars Collectors Journey
Star Wars collecting is a vast hobby with collectors all over the world amassing memorabilia for the past 40 years. The sheer amount of items and information can be overwhelming to those getting started. Gus Lopez will take you through his personal journey from beginner to advanced collector. Using examples from Guss experience, he'll cover how to connect locally with other like-minded collectors while also building an international network of collectors for trading and advice in specific areas of the hobby. Learn about places to buy, books to read, and forums to join. Hear about some amazing discoveries and the conditions that enabled some of those opportunities to happen. Gus will share information about events and conventions where other collectors meet and offer tips for finding Star Wars collectibles while traveling. Finally, every Star Wars collector has a focus and a budget. Gus will walk through examples about how to build a theme around a collection while not blowing a budget. Even amazing Star Wars pieces can be found on a shoestring budget if you know what, where, and how to look, and Gus will share some recent examples to illustrate.
6-7pm

Fakes and Scandals
Have you been Snoked? Join us in a discussion of the Dark Side of Star Wars collecting. We'll review some of the more memorable deceptions and schemes in the hobby, where ethics and morality were put aside for the quick and easy path. From classic bait and switch, to advanced replications of high end items, no facet of the hobby has been left unscathed. This panel of seasoned collectors will hope to illuminate, entertain and provide resources to assist in keeping your collecting path better protected. Presented
by Star Wars collecting veterans Tommy Garvey, James Gallo, Mark Salotti, Isaac Lew, Ross Cuddie and Gus Lopez.
Collectors Social Room, W305
7-9pm
SEND